A star chasing a Demoiselle

HOW LONG DOES IT TAKE?

WHAT IT IS NOT INCLUDED 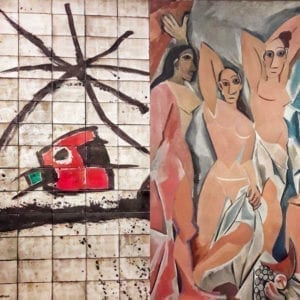 Picasso & Miró, two of the most important painters of the 2oth century, have a very close relationship with Barcelona. Pablo Picasso was born in Malaga but moved with his family to Barcelona at a young age, and Joan Miró was born in Barcelona, not too far away from La Rambla.

Both of them have museums in our city because it was their will to open them here. The Picasso Museum opened in 1963 and is located in a very charming neighborhood known as El Born, on five medieval buildings all built-in stone.  And a few years later in 1975, it was the turn of the Fundació Miró, this one located in the Montjuïc Hill, one of our green areas in town.

We all have very clear images of the most famous paintings of these two geniuses. It is very important to know that an essential part of the collections in both museums reflects the young periods of these painters, so we can discover the important evolution of their work.

Barcelona had different art Schools during this period and a significant artistic life around the city. So it was easy to study and learn from older painters and most especially, to get to know other artists that had been living in Paris, the place to be of every artist/painter of the first quarter of the 20th century. Of course, Picasso and Miró new and admire each other and had many friends in common, here in Barcelona and Paris. Today we have many art galleries around the city, most of them on Consell de Cent street, you might be surprised by all the lithographies and other works from them and many other famous painters that you can buy in Barcelona.